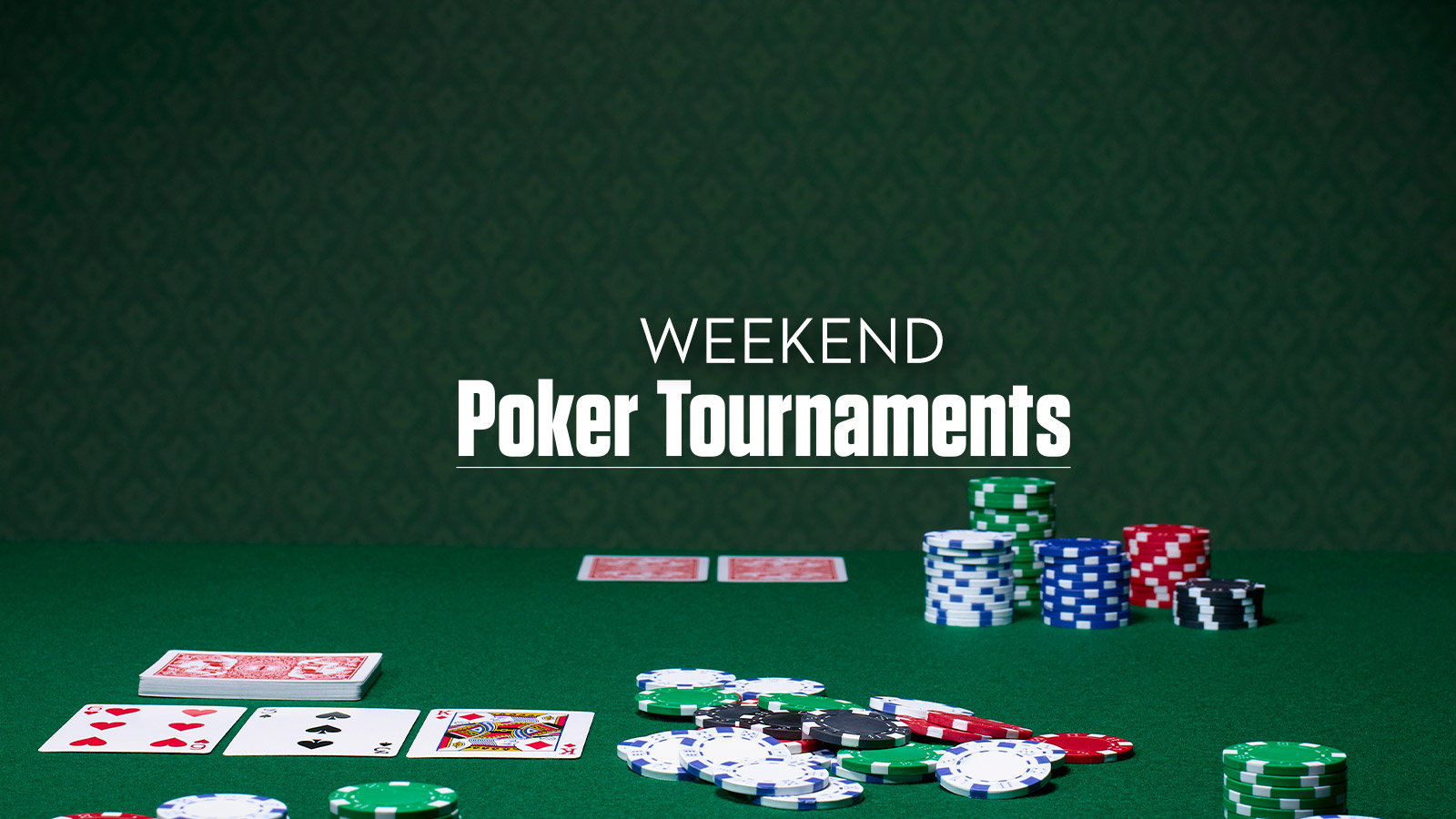 HERE’S HOW IT WORKS:

Our Weekend Poker Tournaments will be as follows:

·      $150 dollar buy-in and $60-dollar re-buys for the first 4 rounds of play. After the 4th round players cannot buy-in to play this event. This event will have several more rounds until it is completed on the final table of play. (Number of additional rounds is not specific.  Number to total rounds will depend on how players get knocked out of play before they finish).

·      During the first 2 hours, players may continue to buy-in and play in the tournament.

·      We will limit these Weekend Poker Tournaments to 5 tables max. Each table can hold a maximum of 10 players. The minimum number of players would be 2 if the final two players continue to play until there is a winner.

·      Players that sign up to play before the end of the 4th round of play (or 11:00am) and did not get a seat immediately because they were none available, will still get a chance to play as they will then be on an alternate list of players waiting to play and will get a seat into the tournament once someone else busts out of their seat in the next (2) Two rounds ahead.

·      We will allow alternates to continue to buy-in until the end of the 6th round (or 11:50am), then after that time they will not be able to play.

·      Requires a minimum of 8 players to start the guarantee.

·      Any number of players below the 8 will have no guarantee amount payout, but will pay only the amount of the buy-ins and re-buys minus the house fee.

·      Registration will continue throughout the first timed break in the tournament with new players being allowed to enter up until that time.

·      Our registration fee will be as follows:

·      Winners will be paid out according to the following percentages of the total prize pool, based on the total number of participants as described below:

Chopping or Splitting of the Prize Pool Money & why players may choose the option – Tournament Rules:

·      The reason tournament player(s) might want to Chop or Split the prize pool money is they may want to have a choice of dividing the prize pool money at an even amount or in a larger group of final players, as they feel that if they don’t make a deal to chop the money, then they might not get any money if they happen to be the next player to get knocked out of the tournament. (example – A tournament with 44 entrants and a prize pool of $2,500 dollars, and if there are 10 player still playing on the final table, based on the payout formula above that the top 7 players will receive money then the next 3 players (Player(s) number(s) 10, 9 and 8 to get knocked out will not receive any money), but if those final 10 players decide to chop or split the prize pool money and end the tournament at that moment then everyone at the final table will receive a payout.

·      If no players ask(s) or want to organize a chopping or splitting of the prize pool money then the tournament continues on until the payouts are completed as pre-determined above (see Prize Structure chart).

·      If some player(s) ask or want to organize a chopping or splitting of the prize pool money, but if anyone of the final player(s) decides that they do (not) want to chop or spilt the prize pool money than the tournament continues on until the payouts are completed as pre-determined above (see Prize Structure chart).

·      Here are all of the rules that will apply when players decide to chop or split the prize pool money:

1.     When players decide to make a chop or split of the prize pool moneys they may agree to chop or split the amount of money evenly or give more money to some players and or any player they determine to do so based on their chips in play and what the remaining players agree upon. All chop(s) or split deal(s) are witnessed and then approved by the floor supervisor before any deal can be finalized. The floor supervisor does not make the deals for the player, but they ensure that the deal is paid out correctly by what the player(s) agreed upon. All Players Must Agree on the deal to make a deal approved.

2.     Do not have to be an ACE Player’s Club member to participate.

3.     Restricted players are not allowed to participate.

5.     Employees of the Poker Department are not eligible to participate.

9.     Chopping or Splitting is allowed at the final tournament table only.  All agreements must be witnessed and approved by the Poker Floor Supervisor or above.  All players must agree for it to be approved. Only one chop or split per tournament.

10.  Winners agree that, as a condition of entry, a Winner’s Log and a Winner’s Release Form will be signed prior to the payment of prizes (if applicable). The Winner’s Logs and Winner’s Release Forms give approval to Agua Caliente Casinos and its agencies the rights to use the winner’s name, character, voice, likeness etc. in any future advertising, without any further compensation due to the winner. The release also holds Agua Caliente Casinos, the ACBCI, and its employees, etc. harmless from the award or use of the prize.

12.  Winners are responsible for all Federal, State and Local taxes for all awards as a result of this promotion where applicable. Winners must provide a Social Security number (and or W-9 Form) if applicable prior to receipt of their award or prize per the ACBCI Reporting and Withholding Internal Controls.

14.  The Agua Caliente Casinos reserve the right and sole discretion to disqualify any gaming participant who has been identified as having “tampered”, in any way deemed inappropriate, with the direct marketing offers. This includes but is not limited to, counterfeiting or copying of drawing entries, placing foreign objects or inappropriate markings on the entries or direct marketing offers. This disqualification will also include but is not limited to “tampering” with the entry process or any other promotional related item, or acting in a manner that may be in violation of the Official Rules or in a disruptive manner with the intent to disrupt or to undermine the legitimacy of the promotion or with the intent to annoy, abuse, threaten, or harass any other person(s).

15.  All promotions will be administered in accordance with the ACBCI systems of Internal Controls, Policies, and Procedures.

16.  All guest dispute(s) related to this promotion will be handled in accordance with the ACBCI Internal Controls for Guest Disputes.

17.  Each casino must include a responsible gambling message on printed materials for this promotion where practical. The message will read: Problem Gambling? Call 1-800-GAMBLER. Signage must also be located within each casino.

19.  The Agua Caliente Gaming Commission (hereinafter referred to as ACGC) retains the right to suspend, rescind, or void any promotion that fails to maintain and protect the assets, integrity and reputation of the Tribe.

End your day together with A Kiss of Sugar💋

Our Valentine’s Day gift to you is a complete indulgence of the senses. Share together a calming, luxurious private bath with our Sugar Kiss Shower Oil & Bubble Bath.

Mardi on at Party Gras!

Grab your beads and join us on Saturday, February 18th for our outdoor street party! Enjoy live performances by @laallstars, games, prizes, food, booze and a second line parade🎉

Thank you all who attended and participated at each event!

What Agua Caliente event are you looking forward to this weekend?

Mixing it up with our newest Mixologist, Byron, at Agave Caliente Tequila Bar in Cathedral City! Try out his special drink - Lava Flow 😍🌋

Embrace the “Year of the Rabbit” as you walk through our Rancho Mirage & Palm Springs Casino properties. 🧧✨.

Mixing it up with our newest Mixologist, Byron, at Agave Caliente Tequila Bar in Cathedral City! Try out his special drink - Pineapple Mexican Mule🍍

Electrifying night with @collectivesoul at The Show last Friday!!! 🎸🎶✨

Be sure to visit our website to see upcoming entertainment and secure your tickets!👇

PÍvat’s Drink of the Month Special, New Year Glo, has us starting our resolutions the right way.

Exclusively at PÍvat for the month of January!

We are honored to announce that our Sunstone Spa has been ranked as the #1 Spa in California, #10 in the United States, and #12 in North America under the Top Spas of 2022! 🧖‍♀️🏆

UPDATE: Due to inclement weather, our Lucha Libre Mexicana event has been POSTPONED to Saturday, January 28th!

Tag a friend who you would bring to the ring! 🏆