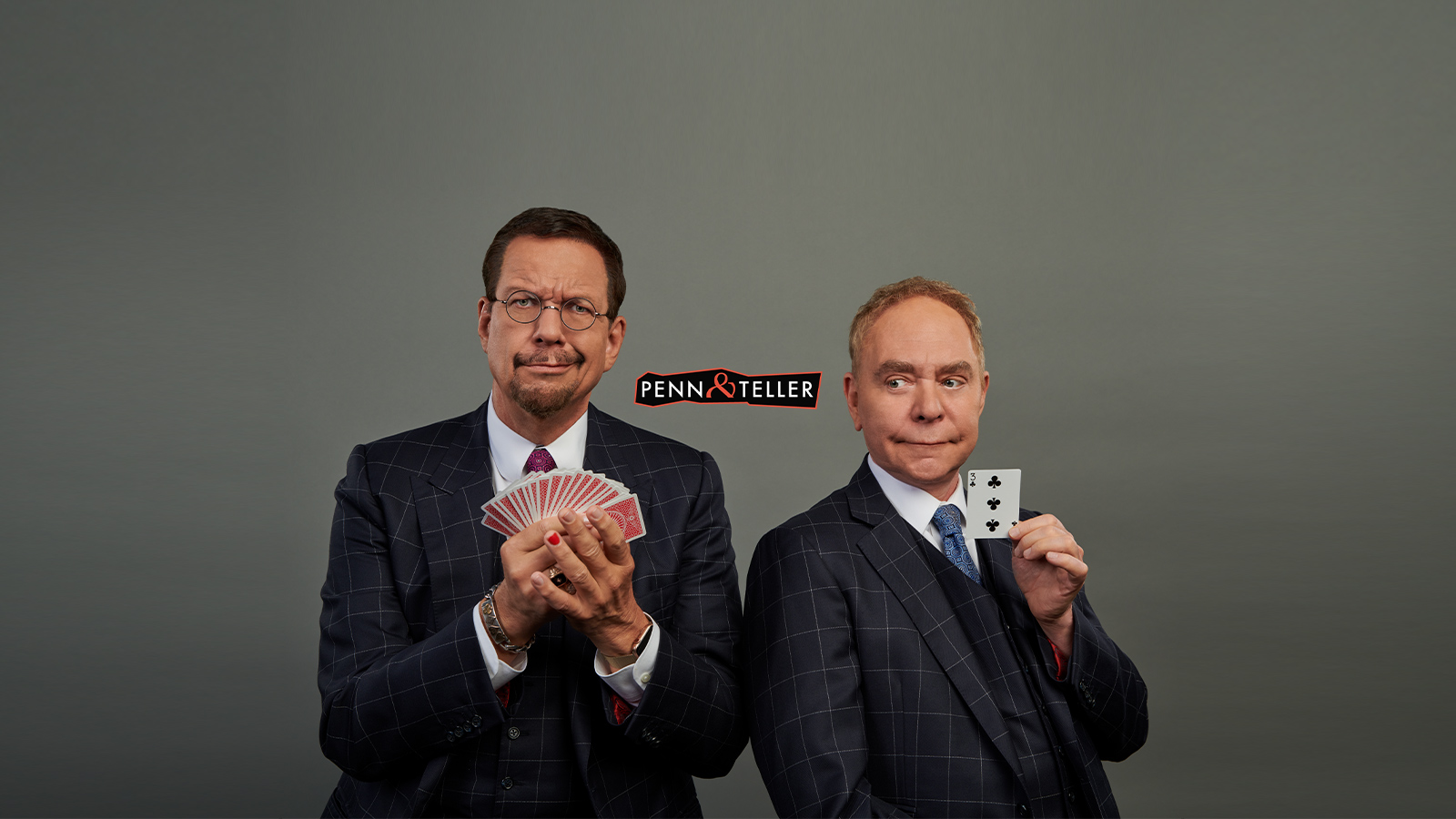 From humble beginnings busking on the streets of Philadelphia to acclaimed sold–out runs on Broadway to the longest running and one of the most-beloved resident headline acts in Las Vegas history, magic’s legendary duo continues defy labels—and at times physics and good taste — by redefining the genre of magic and inventing their own very distinct niche in comedy.

Their record-breaking Las Vegas show at The Rio All-Suite Hotel & Casino has an amazing nine wins as “Las Vegas Magicians of the Year” and was called “The single best show in Vegas,” by the Los Angeles Times.

The current hit series Penn & Teller: Fool Us! for The CW Network, on which up-and-comers and magic veterans try to fool Penn & Teller for a chance to star in the pair’s hit Las Vegas stage show, was nominated for a Critic’s Choice Award and will return for a ninth season in late 2022. Hundreds of outrageous appearances on everything from Fallon to Friends, The Simpsons to Colbert, Modern Family to Big Bang Theory, plus their own specials for NBC, ABC, PBS and Comedy Central have garnered them an Emmy and a Writers Guild Award. The duo has its own star on the Hollywood Walk of Fame. The controversial Showtime series, Penn & Teller: BS! was nominated for 13 Emmys and was the longest-running series in the history of the network.  The show highlighted the pair’s ardent skepticism by tackling the fakes and frauds behind such topics as alien abduction, psychics and bottled water.

In recent years they’ve become acclaimed documentarians with the BAFTA-nominated Sony Pictures Classic release Tim’s Vermeer, which follows Texas-based inventor Tim Jenison on his quest to discover the methods used by Dutch Master painter Johannes Vermeer. Their other films, the critically lauded feature The Aristocrats and the Showtime short The Gambler’s Ballad, were met with wide praise.

The Olivier-nominated Magic Goes Wrong, written and created in collaboration with Mischief Theatre (Creators of the Tony-nominated The Play That Goes Wrong), opened in January of last year at London’s West End Vaudeville Theatre, setting a box office pre-sale record. The Daily Mail hailed it as a, “Spellbinding romp,” while The Sun theater critic raved, “I’ll be laughing into next week.”

As individuals, they are just as prolific.  Teller directed versions of Macbeth and The Tempest that toured to raves from The New York Times and Wall Street Journal, co-wrote and directed the Off-Broadway thriller Play Dead and has written two books.  Penn has written three books, including the New York Times Best Sellers, “God No!” and “Presto”.  He hosted the NBC game show Identity and donned his ballroom shoes for ABC’s hit Dancing With The Stars. Penn also showed his business savvy on two seasons of NBC’s All-Star Celebrity Apprentice.