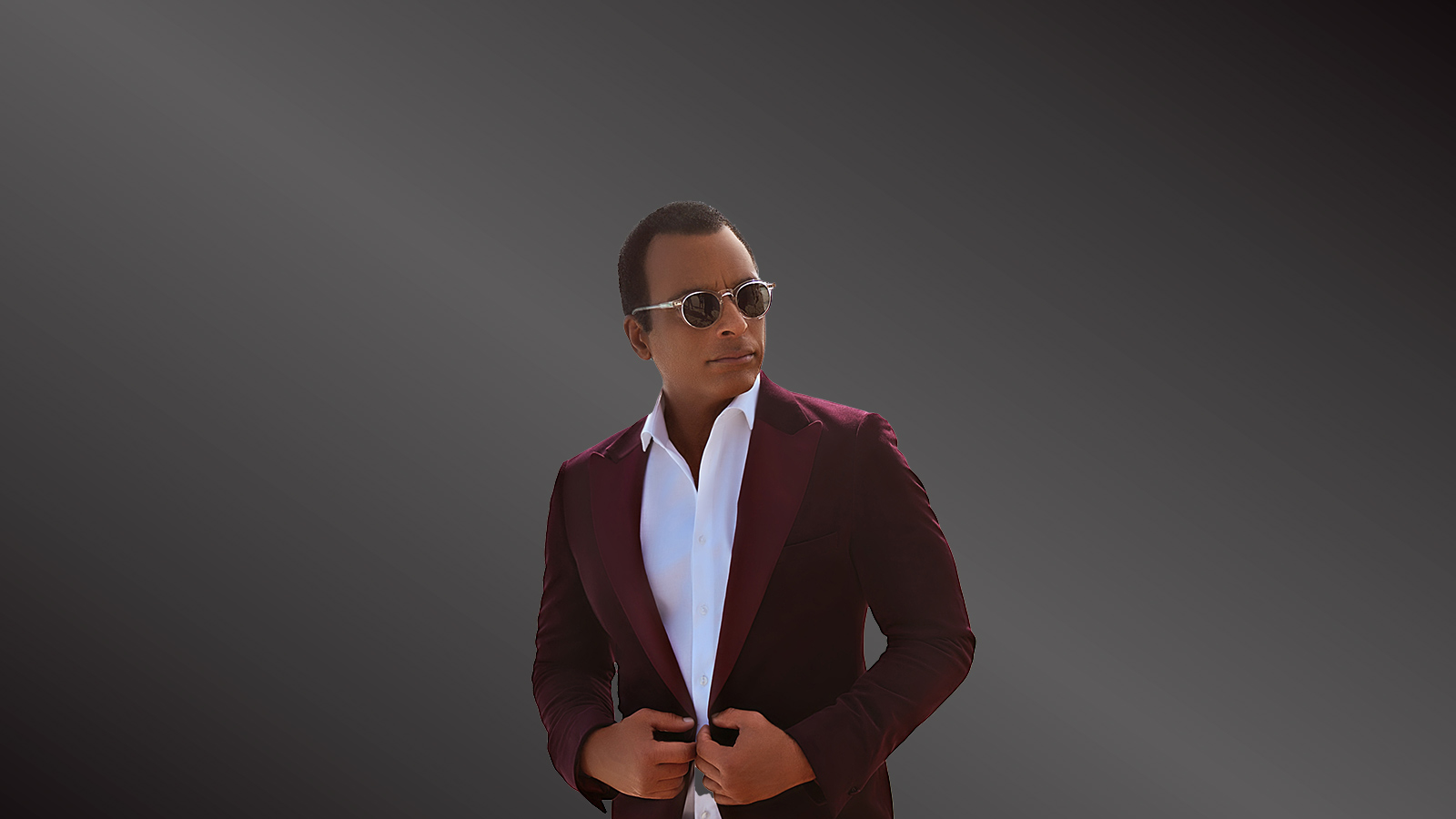 Jon Secada in Concert with The Desert Symphony

With a career spanning over two decades, three Grammy Awards, 20 million albums sold, and starring roles on Broadway, the acclaimed, romantic sounds of Jon Secada, have resulted in numerous hits in English and Spanish, establishing him as one of the first bilingual artists to have international crossover success. Adored by millions around the world, he is recognized as an international superstar by both fans and peers alike for his soulful and melodic voice. As of October 2021, Jon Secada and multi-grammy award winner Gonzalo Rubalcaba were nominated to the Latin Grammy, for their collaboration on “SOLOS”. A musical journey through revamped renditions of classic Boleros, composed and sung by artists of Cuban roots and influence. In 2017 Secada returned to the stages, bringing to life a heartfelt tribute to Beny Moré, one of Cuba’s most beloved icons. Produced by Julio Bagué with the support of Peer Music and in the company of The Charlie Sepulveda Big band ”…To Beny Moré With Love” finds the Cuban-American artist re-recording ten of Mor’és timeless classics, arranged by none other than Ray Santos. The biggest challenge with the project was to make sure they did it by the original arrangements and vocals since they wanted to preserve as much as possible the integrity of the mu-sic. Acknowledged as Humanitarian of the year in 2016 by The Muhammad Ali Foundation, Secada’s career skyrocketed in 1991, with the release of his self-titled debut album Jon Secada (SBK/EMI), which sold over six million copies worldwide, was certified triple platinum in the U.S., and reached No.15 on Billboard’s Pop album chart. The Spanish-language version of the album, Otro Dia Mas Sin Verte (EMI-Latin), went on to become the Number One Latin album of 1992 and earned Jon his first Grammy Award, for “Best Latin Pop Album.” Three more top 20 Billboard hits would eventually come from that album including “Angel,” “I’m Free,” and “Do You Believe In Us.” The un-precedented success for Secada continued in 1994 with the platinum selling release of his second album Heart, Soul and Voice (EMI), which garnered another top 10 hit, “If You Go”, and followed with his third album, Amor, earning him his second Grammy Award for “Best Latin Pop Performance.”

Beyond his own hits, Secada is widely recognized for his impeccable producing and songwriting skills. One of his first major breaks came from collaborating with Gloria Es-tefan in the late 1980s, which led to him co-writing her #1 hit single, “Coming Out of the Dark.” Since then, Secada has gone on to pen countless popular songs for super-stars such as Jennifer Lopez and Ricky Martin. Still friends to this day, Estefan shares the world’s passion for Secada’s talent, remarking, “I’ve been a big fan of Jon’s since I first heard his beautiful voice! He’s one of those special singers that makes my hair stand on end!” Ricky Martin for whom Jon wrote the #1 hit, “She’s All I Ever Had,” raved, “In addition to being a great human being, Jon has an innate talent for writing beautiful songs. All of us artists who have worked with him sincerely admire him.” Secada co-wrote and has co-produced songs for Mandy Moore, Alejandro Fernandez, on their multi-platinum albums; he toured and collaborated alongside opera legend Lu-ciano Pavarotti and recorded duets with Jim Brickman, Grammy winner Olivia Newton John and the iconic Frank Sinatra. He has also collaborated in many movie sound-tracks such as Dance with Me, Disney’s Pocahontas, Empire, Chasing Papi, and Zorro, among many others. Throughout his career Secada has participated in various international television shows including being a celebrity judge on the international smash, “Latin American Idol,” for it’s entire four season run, and as a celebrity contestant on Univision’s hit dance show “Mira Quien Balia” (Latin version of “Dancing with the stars”) which reaches over 10 million viewers. Jon is also involved in many business ventures and projects including a Miami based music lounge called “Secada’s” at the Magic City Casino, which contin-ues to enjoy sold out shows and great reviews. In addition to numerous recordings such as “Same Dream” and “Classics,” in the late 2000’s, in 2011, Jon released his seventh Spanish album, Otra Vez (YMe/Pyramid), which received universal acclaim, and spawned multiple hits on radio stations, world-wide. Secada continued a musical legacy with the release of “I’m Never Too Far Away”, which charted top 25 on Billboard. The single and music video commemorated the 20th anniversary of Secada’s music career and the release of his official RIAA Gold hit “Just Another Day.” The song also marked Secada’s first collaboration with Billboard Magazine’s five time “Producer of the year,” and six time ASCAP “Songwriter of the Year” winner, Rudy Perez. FIRST YEARS In 1979, Jon Secada graduated from South Florida’s Hialeah High School. He then at-tended the University of Miami where became an accomplished jazz musician. In 1983 Secada received his bachelor’s degree in Music then continuing his education earning a Masters degree in Jazz vocal performance. He graduated cum-laude in 1986 and was later inducted into the Iron Arrow Honor Society. Throughout this time, Secada worked incessantly at nightclubs, did voiceovers and wrote numerous jingles. In 1988, he met Emilio Estefan who grew a liking to Secada and wanted him to learn the music industry and all it entailed. Again, continuing his education in the field of mu-sic. The close relationship he made with Mr. Estefan gave him the opportunity to join Gloria Estefan’s Into the Light tour. While on tour, Jon performed his song Always Something from his first album titled Jon Secada. Soon after Jon Secada signed a mul-timilliondollar recording contract with EMI/SBK Records.

HUMANITARIAN WORK
Secada’s impact goes beyond music as he has devoted himself to assisting various charitable groups all over the world through his personal organization, “Jon Secada Charities.” He has been active with many causes to help Hispanic Americans, children, education, AIDS research, and child abuse. His commitment to education and helping others led him to create the Jon Secada Music Scholarship at the University of Miami. He’s also led an ongoing effort to raise awareness for Hepatitis C by partnering with pharmaceutical giant MERCK and The American Liver Foundation. For his efforts, The Pan American Health Organization recently honored Secada with an award that ac-knowledged him as a leader in Hepatitis C awareness around the world. In September 2012, Jon also headlined the “Miami Rocks The Troops” benefit concert, supporting US military veterans across the country.

PERSONAL LIFE Jon and Maritere first met in 1994. Maritere had been contracted to choreograph Gloria Estefan’s music video Buen Amor from the popular album Mi Tierra. Shortly after, she joined the staff of Estefan Enterprises. Jon and Maritere were set up on a blind date and their relationship flourished thereafter. They were married February 22, 1997. Their first child Mikaela Nina Secada was born February 15, 1999. Three years later on July 8, 2002 their son Jon Henri Secada was born.